My criticism of the Bicycle Friendly Communities (BFC) program

I’d like to expand on my criticism of the Bicycle Friendly Communities (BFC) program and why I think it is so abhorrent.

I’ve written two books & thousands of magazine articles on bicycling, and worked since 1981 as an expert witness in bicycle crashes. I am an avid observer of the causes, both direct and indirect, of crashes.

The problem with the BFC program is that it gives no priority to correcting some grave crash causes. Instead, it avidly promotes crash-causing facilities. END_OF_DOCUMENT_TOKEN_TO_BE_REPLACED

Explicit hazards are traps. Three of the traps are:

1. The “coffin corner”: Standard “Rules of the Road” require that someone making a right turn move first “as close as practicable” to the right edge of the road. Anyone going straight through the intersection should pass on the left.

But a bike lane stripe instructs just the opposite behavior — a right turning motorist is told to stay left of the bike lane where (s)he will cross paths with a straight-through cyclist. This risks a “right hook” collision. There is also an increased risk of collisions with left-turning motorists who are less likely to see a cyclist at the edge of the road.

2. The “door zone”: Where bike lanes are provided next to parked cars, it is very rare that they are outside the area that can be suddenly blocked by an opening car door. It takes much more than the 12 or 14 feet recommended by the AASHTO Guide for the Development of Bicycle Facilities. Door zone bike lanes create a serious hazard that causes many casualties.

3. Bike lanes on steep downhills. The photo at right shows a steep descent (7 percent grade) where the 5 feet provided in the bike lane is not nearly enough for safety.

One of my friends likes to say “Advocacy for cycling isn’t like rocket science. It’s much harder.” (Reason: if the rocket blows up, everyone knows they screwed up. When a cyclist gets killed because of a bad facility, the designer of the facility has a folk-singing group to defend him, and assails the character of anyone who tries to do a failure analysis of what caused the death.) END_OF_DOCUMENT_TOKEN_TO_BE_REPLACED

Why Downhill Bike Lanes are Dangerous

Bike lanes are often promoted as “the solution” for bicycling anywhere. But there are many places where bike lanes are not appropriate and even dangerous. One such place is on a downhill where the slope is greater than about two percent. The photo at right shows a marked bike lane on a seven percent grade. This is on Prescott Lakes Pkwy. in Prescott, AZ. About the only ameliorating factor in this bike lane is that it is so steep that few people try to ride it. END_OF_DOCUMENT_TOKEN_TO_BE_REPLACED

Here are some photos of bicycle facilities in downtown Chicago from July 2014.

This cycletrack has narrow lanes, a special hazard to contra-flow (SB) cyclists, who are next to the sidewalk. It would be safer to have a buffer between the sidewalk and the track instead of next to the parking/turn lane.

Dearborn is a 1-way street with 2-way cycle lanes. Note how narrow the lanes are. Does this meet design standards? There is also a falling hazard from the curb and a hazard from pedestrians stepping off the curb without looking because no moving cars are in that lane. END_OF_DOCUMENT_TOKEN_TO_BE_REPLACED
Posted in Uncategorized | Comments Off on Chicago Bikelanes

Here are some photos of bicycle facilities in New Haven and Albany from June 2014. 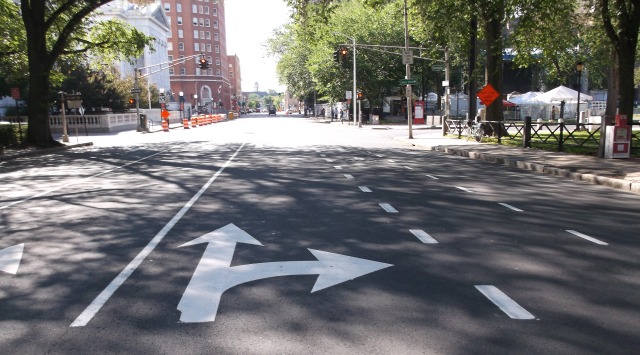 This bike lane is a “coffin corner”, to the right of a straight through/right turn lane.

MOVE OVER OR SLOW DOWN, a good safety message

In my new hometown of Prescott, Arizona, I’ve gone exploring looking for good and bad places to ride my bicycle.

I found a really bad place: a narrow bike lane on a hilly multi-lane road, Willow Creek Road. The bike lane confines cyclists to their own little ghetto while traffic rushes by, inches from the left elbow. There are many intersections which invite right hook collisions and collisions from poor sight lines. A steep 6% downhill run just ahead allows cyclists to coast approaching the speed limit of 40 mph, at which speed one should not be occupying a narrow bike lane, next to motorists who are ignoring you. END_OF_DOCUMENT_TOKEN_TO_BE_REPLACED

The new mission (or vision) at LAB

Here, in its entirety, is what LAB posted on its website on January 17, 2014, regarding its emphasis for at least the near-term future.  Bill Hoffman’s comments follow.

LAB is no longer a membership organization; it’s a lobbying group that happens to have members.

END_OF_DOCUMENT_TOKEN_TO_BE_REPLACED

Rather than retype everything, go here: http://labikes.blogspot.com/2014/02/when-did-momentum-magazine-lose-its.html

A new bicycling education and advocacy organization “I Am Traffic” held a colloquium in Feb. 23-24 Orlando. You can watch some of the presentations and read some really good educational material from the website. The keynote speaker was Keri Caffrey who talked about How to Achieve the Vision for a culture that supports successful behavior. 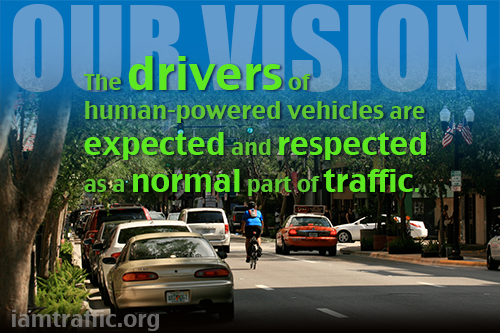