Whose League is it Anyway?

This article explains why it is so important to help the LAB election petition drive. 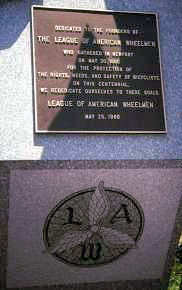 The League of American Wheelmen (now LAB) formed in 1880 to protect the rights and the interests of cyclists. The League was a democratic organization where members were encouraged to serve on the board and volunteers were welcome. The League held large rallies and provided services to members, including Legal Services, Touring Information Directors and Hospitality Homes. And most important, the League ran John Forester’s Effective Cycling program. You can read about this in Bill Hoffman’s “A Brief History of LAB”.

But beginning in 1998, members’ rights were weakened when four of twelve director seats were taken from members and given to outside organizations as appointed seats. These outside groups (bicycle industry, fitness, health and active living advocates) provided extra funding that allowed the League to pay for more staff for advocacy activities even as member services were eliminated. These outsiders do not support the core mission of the League.

These outside directors gradually steered the League towards political action and away from protecting cyclists’ rights and especially education. Starting in 2001, the education program was badly mismanaged and the board refused to make it right. Long-time members protested by circulating an open letter “Which Way LAB?” at the 2002 rally. But the board adopted a “circle the wagons” approach, ignoring the issues raised and increasingly operating in secrecy.

Reformers used election petitions to get on the ballot and challenge the board in 2002 and 2003. A faction of the board interfered in the 2003 election to defeat one of the reformers and maintain their control of the League. Then they quietly added a fifth appointed director during a telephone meeting and passed radical Bylaws changes to thwart future petition candidates from getting on the ballot.

In the 2008 election, the board declared that the former editor of the League’s magazine was “not qualified” and refused to allow her to be on the ballot. As a result, we had a Soviet-style election (only one candidate per seat).

Did you know that it now takes more then 1000 signatures (5% of the memberships) for anyone not approved by the Board to get on the ballot? Until 2003, it took 50. This is several times the total votes cast in most recent Board elections. Unless we can overcome this hurdle, the LAB elections will continue to be a sham.

This is why it is so important to help the election petition drive.