The new mission (or vision) at LAB

Here, in its entirety, is what LAB posted on its website on January 17, 2014, regarding its emphasis for at least the near-term future.  Bill Hoffman’s comments follow.

LAB is no longer a membership organization; it’s a lobbying group that happens to have members.

January 17, 2014 A NEW MISSION AND VISION FOR THE LEAGUE LEAGUE BOARD/LEADERSHIP NEWS by Andy

When more people ride, individual lives are better; communities are stronger and better connected; our nation is healthier, happier and environmentally and economically stronger. After a day and a half of discussing, brainstorming, and parsing, these simple and powerful beliefs emerged from the League Board of Directors’ strategic planning retreat. To me, they represent not only a compelling statement of beliefs but also an irresistible reason for “why” we do the things we do at the League.

So strongly do we believe these things that we want everyone in every community across the country to enjoy the benefits of bicycling and to have the opportunity to get on their bike and ride, for whatever reason is important to them. We see a future where that is possible — and yet we know we have our work cut out to make that vision a reality.

After affirming such a set of beliefs and laying out that bold of a vision, we enthusiastically took the next step. We stepped forward and embraced the challenge of leading the movement to create a bicycle-friendly America, for everyone. At this exciting moment, the League board and senior staff was writing the prologue to the next chapter of our 134-year history. The deliberate and repeated focus on “everyone” speaks volumes to our commitment to inclusivity. Listening and learning emerged as key words in how we define leadership, alongside an internal commitment to being more intentional about the role we play (and sometimes don’t play) in the broader bicycling movement.

I’m also excited to report on a powerful, unifying, and timely strategy that emerged for our work in 2014. This year marks the 20-year anniversary of the National Bicycling and Walking Study — a congressionally-mandated action plan to double bicycling and walking levels while reducing crashes by half. That “study” created a genuine focus and specific action plan for federal, state and local transportation agencies that we need to re-create in 2014. More than that, we need to seize the momentum for bicycling that exists at the local level across the country; set more ambitious national goals; and engage health, economic development, energy, and environment as well as transportation agencies in realizing the full potential of bicycling.

A new National Bike Strategy – a national bike plan, if you will – can unify our movement, focus our energies, and be a catalyst for real change by identifying a clear role for advocates, the business community, and government agencies at all levels in achieving two simple goals: getting more people riding, and making biking safer.

The 2014 National Bike Summit is the start of the process – and it’s no coincidence that we chose “United Spokes” as the theme for this year’s gathering of the bicycling movement’s leaders. A national bike plan doesn’t work if it’s a solely a League campaign — we must listen, learn and lead the bicycling movement to make it happen. That’s our mission, and I’m fired up and ready to go.

These noble-sounding words say nothing about training cyclists to ride correctly, or protecting and defending cyclists’ rights. Are we to assume that these principles, on which the League was founded and on which it operated for most of its 134 years, have been abandoned? That’s the impression I’m left with after reading Andy’s article.

Here are the mission statement and vision that appear on LAB’s home page:

OUR MISSION is to lead the movement to create a Bicycle Friendly America for everyone. As leaders, our commitment is to listen and learn, define standards and share best practices to engage diverse communities and build a powerful, unified voice for change.

OUR VISION is a nation where everyone recognizes and enjoys the many benefits and opportunities of bicycling. 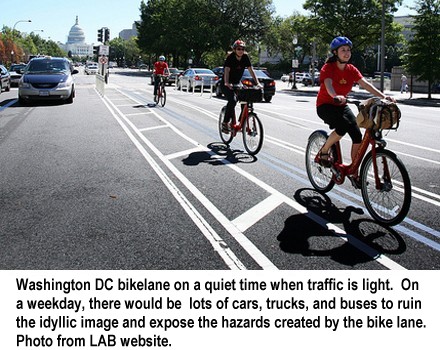 In addition to saying nothing about protecting cyclists’ rights or teaching them to ride safely, there is also nothing at all above about members. Until LAB moved to Washington in 1997 and started acting more like a lobbying group than a membership organization, members—their interests, their role in the League’s operation, and the tangible and intangible benefits they received—were uppermost in the thoughts and actions of the Board and staff. None of that is true any more. It’s bad enough that members have literally been thrown under the bus, but the manner in which this occurred is shameful. Take the mission and vision above, and Andy’s article. None of this was presented to the membership in the bi-monthly magazine or on the website until after the fact. We were given no opportunity to comment on a draft or to suggest that perhaps no mission or vision change at all was needed.

Consider how the Board structure has changed in recent years. All directors (the number ranged from 12 to 15 for most of the 43 years I’ve been a member) used to be elected by the membership. Now there are 17 directors, but only 9—barely half—are member-elected; the rest are Board-elected, which is to say, appointed.  And the member-elected board members are chosen from a slate approved by the board.  Reformers are not welcome at LAB.

This ensures that the Board will perpetuate itself with like-minded people, and effectively prevents anyone who questions the existing order from getting on the Board, and thwarts any attempt by the members to make substantial changes either in policies or operations.

One reason given when several seats were changed from elected to appointed was that very few members voted in elections. That’s true, because the elections were more like ratifications than real elections. There was often only one candidate for a seat. Admittedly, it was often hard to find people willing to run for the Board, so the lack of real choices was not always the Board’s fault, and the Board now makes a good-faith attempt to find more than one candidate for each elected seat.

But their screening process virtually guarantees that no dissenters will be accepted. Steep restrictions have been imposed on members’ ability to run for the Board, in the form of a petition requirement that’s nearly impossible to meet. It was this restriction that led me to withdraw from my re-election bid in 2008. I had been approved by the Board, which meant I was on the ballot, but other candidates who shared my views were prevented from running by the onerous petition requirement. Hence, my statement above that the Board now has a mechanism for perpetuating itself and ensuring that, effectively, only one viewpoint is accepted. Anyone not sharing that view is limited to protesting at the curb.

While there may have been no deliberate attempt by the Board to prevent members from knowing about its decisions and deliberations, minutes of Board and committee meetings are buried deep in the website. You have to enter “Board minutes” or similar words in the search box in order to find them. No minutes later than January, 2013 have been posted (as of January 19, 2014); surely the Board and/or Executive Committee must have met more recently than that, even if by telephone. And some of the minutes are very sketchy, little more than a record of attendance and a list of motions and the votes thereon. One cannot get a clear picture from reading the minutes of what views the directors hold or how discussions of issues unfolded.

Were the League more focused on its members, the minutes would be easier to find and would be posted promptly. In addition, no Board meeting agendas are posted prior to the meeting, nor are there announcements of when and where the meetings will occur, so that anyone interested can attend or submit comments or agenda items.

Oh, but I forgot, LAB is no longer a membership organization; it’s a lobbying group that happens to have members. They neglected to tell us that we’re no longer part of the picture, except when it’s time to raise money.

My advice in the face of Andy Clarke’s latest message: if you don’t agree with LAB’s “new direction”, drop out, and if you’re not a member, don’t join. If you’re like me—an LCI, who must remain a member in order to keep your certification, and/or a Life Member who can’t drop out, you can express your dissatisfaction by not contributing any money beyond your dues and LCI fee. I had once named LAB as a beneficiary of my estate, but I removed them in favor of other charities and non-profits that operate in a more transparent manner and that don’t change their mission without my knowledge.

3 Responses to The new mission (or vision) at LAB