LAB Reform — BikeLeague News — As it SHOULD Be

This is a simulated version of how a member-oriented BikeLeague would report cycling news.  It shows the kind of news the League should be reporting.

Welcome to LAB Reform BikeLeague News.  Compare what you see here to the fluff the League actually reports.  For more information about LAB Reform, visit http://www.labreform.org.  Please forward this link to anyone who may be interested.

Disclaimer:  Unfortunately, the events depicted here are fiction or fictionalized.  The opinions do not represent the views of the current Board of the League of American Bicyclists.  We need to replace several board members and reform the League so we can read true stories like these.

We are especially grateful to the Ohio Bicycle Federation for sharing this material with us.  The revamped BFC program will urge community officials to understand and encourage operating bicycles as vehicles.  The program is consistent with the League’s Best Practices of Cycling Advocacy® initiative.

Knowledgeable volunteers from the Ohio Bicycle Federation developed an extensive Web-based “Toolkit” of reference and educational materials for communities to use.  This is a terrific resource that we will build upon.  Until the League adapts the Toolkit for its own web site, we urge anyone interested to visit the OBF site at www.ohiobike.org.  Another valuable source of information is the web site of the North Carolina Coalition for Bicycle Driving, www.humantransport.org/bicycledriving.

The safest way to operate a bicycle is by driving on the same roads, following the standard rules of the road, and with the same rights as other drivers.  This is the basis of the League’s BikeEd program.

Now the League is starting to do something about this problem.  A committee of volunteer cycling experts is researching the bicycle traffic laws in all 50 states and evaluating each one according to a set of “Model Bicycle Laws” they developed.  Preliminary ratings for the first few states have just been published here.  A summary will be published in the next issue of the League’s magazine.

In the ratings, each state receives a “grade” based on safety and fairness to cyclists.  Ratings so far range from a “B” for Nevada, N. Carolina and the Uniform Vehicle Code, to a dismal “F minus” for S Carolina, New York and Michigan.  The ratings will help state advocacy groups working for reforms.

Most people in our society are badly misinformed about bicycle operation.  A large part of the problem is official and semi-official misinformation.  The League Education Committee (EdCom) is doing something to correct this problem.  As a start, they have just published a “White Paper” on bicycle driving that will be published on the LAB web site and sent to the media.  The White Paper will be sent to newspapers and radio stations, particularly to correct distorted cycling news stories.

EdCom is also responding to reported incidents of misinformation.  In a recent effort, EdCom is helping Cannondale Bicycle Company correct misstatements in its “Bicycle Owner’s Manual”.  Among the mistakes these dangerous instructions:  Ride in designated bike lanes, on designated bike paths or as close to the edge of the road as possible.  Cannondale will instead follow the example of Breezer Bikes and replace this portion of their manual with the excellent booklet Bicycling Street Smarts

The League is appealing to members with legal expertise to help establish a legal advice service for members unjustly issued a traffic citation (ticket) or to help seek recovery for damages or injuries from a crash.  The League urges cyclists to ride in accord with the standard rules of the road.  We will not help fight a just ticket for a real infraction, only for unjust legal harassment.

The League had a similar program back in the 70’s that was cut during the leadership crisis in the 90’s.  Now that the League is back in the control of members, important services are being restored.

Recent articles on reforming bicycle traffic laws, legal defense of cyclists and on removing dangerous “bikepaths” beside the road are clear evidence that the BikeLeague has returned to its core values of protecting the rights and interests of cyclists and of supporting the best practices of cycling. Several members have complimented the new editor, Julie Wordsmith, for significant improvements in the quality of the content.  The magazine is now much more informative than it has been in years.  Several League members have told us “The magazine is finally worth reading again.”

The League has called on the US National Highway Traffic Safety Administration to correct several serious errors in the bicycling portions of the Safe Routes to School program.  League president Ima Wheeler, in a press release, reminded the agency that no route is safe for children who have not been taught to ride properly and that almost any route can be safe for a properly trained cyclist.

Wheeler pointed out a glaring error on the cover of the NHTSA publication that shows a child riding on the wrong side of the road.  “This is one of the most serious mistakes any cyclist can make”, she said.  “It is unconscionable that such an obviously dangerous practice is shown right on the cover.”  Wheeler also presented a list of other errors in the booklet and threatened that the League may withdraw support for the program unless these errors are corrected.

This valuable three-day educational forum on improving bicycling policies will focus on the League’s Best Practices of Cycling Advocacy® initiative with emphasis on preventing the dangerous mistakes too often made in the past.  It also includes an important day for educating decision-makers on Capitol Hill about best practices.

Beginning this year, the Summit is affordably priced so that ordinary cyclists can attend, not just those with a rich expense account.  This is more evidence that the League is now being run for the benefit of members, not an elite group of outsiders.

The Summit features seminars covering bicycle driving and bicycle transportation issues.  The League will coordinate scheduling meetings with your Members of Congress, with full background on bicycle driving issues.  At the close of the day, we will host a reception on the Hill for Summit participants, legislators and staff.  On Friday afternoon, League Cycling Instructors will lead a ride around historic Washington, DC, and our national monuments with the members and staff of the Congressional Bike Caucus and the Senate Bike Caucus.

To make the event more useful to state and local activists, we have issued a “call for papers/presentations” to help us identify the critical issues currently facing the bicycling and walking community.  The deadline for submission of proposals for papers and presentations is December 12.  This year a special invitation is offered to volunteer experts from the ranks of League members.  In previous years, these experts had been snubbed in favor of mis-informed activists from organizations the League was soliciting for money.

The state of Florida has one of the worst bicycle safety records in the nation despite (or perhaps because of) spending millions of dollars on bicycle planners and consultants and building facilities to separate bicycle and motor traffic.  The League concludes that most of this money was wasted.  Indeed, many of the facilities are more dangerous than nearby roadways, especially to people untrained in driving bicycles. 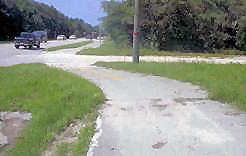 We are specifically calling for removal of the most dangerous facilities, bicycle sidepaths, such as the one shown at right.  The photo shows a two-way sidepath on one side of the street.  The path is located north of Daytona Beach on Florida Route A1A.  Hazards created by the path include frequent intersections with cross roads and driveways, many sharp curves on a path that parallels an arrow-straight road and slippery sand on the surface.  (Sand is a problem because of lower elevation than the roadway and it is near the beach).

Various studies of accidents involving cyclists show that riding on a sidewalk or sidepath has a collision risk between two and nine times as high as does riding on the adjacent roadway, depending on factors including the speed of bicycle and motor traffic, traffic density and frequency of driveways and cross streets.

Bike lanes also create hazards for novice cyclists (they very people they are supposed to protect).  Bike lanes, typically are separated from the “motor lanes” by a painted stripe.  This stripe encourages motorists to stay to the left and cyclists to stay right, even when the rules of the road require otherwise.  This often leads to accidents because both parties are confused.  They also threaten the rights of cyclists to ride anywhere but in “their place.”

The good thing about bike lanes is they are easy to remove; simply grind off the paint stripe and teach people where to ride.  The League urges Florida to conduct a public education program, using TV and radio public service announcements, posters, signs and to distribute widely the booklet Bicycling Street Smarts, which has been adopted as the state bicycle drivers’ manual.

GIVE THE GIFT OF BETTER BICYCLING TO A FRIEND

Lance says, “I am proud to be a member of the League of American Bicyclists especially now that it is promoting Best Practices®.  I look at it as an investment in our future.  After all, the more that people are biking correctly, the better they show by their good example that cyclists are drivers who belong on the roads.  I wish I had learned proper bicycle driving when I was developing as an athlete.  The knowledge would have saved me several painful accidents.”

Reproductions here of copyrighted League of American Bicyclists materials were produced under fair use guidelines.

Would you like to see true stories like these coming from the League?  You can help make it happen.  Please join LAB Reform and help rescue the League from the ruling faction.  See www.labreform.org to join LAB Reform.

Please help to take back our League!