MOVE OVER OR SLOW DOWN, a good safety message

In my new hometown of Prescott, Arizona, I’ve gone exploring looking for good and bad places to ride my bicycle.

I found a really bad place: a narrow bike lane on a hilly multi-lane road, Willow Creek Road. The bike lane confines cyclists to their own little ghetto while traffic rushes by, inches from the left elbow. There are many intersections which invite right hook collisions and collisions from poor sight lines. A steep downhill run just ahead allows cyclists to coast upwards of 40 mph, at which speed one should not be occupying a narrow bike lane, next to motorists who are ignoring you. 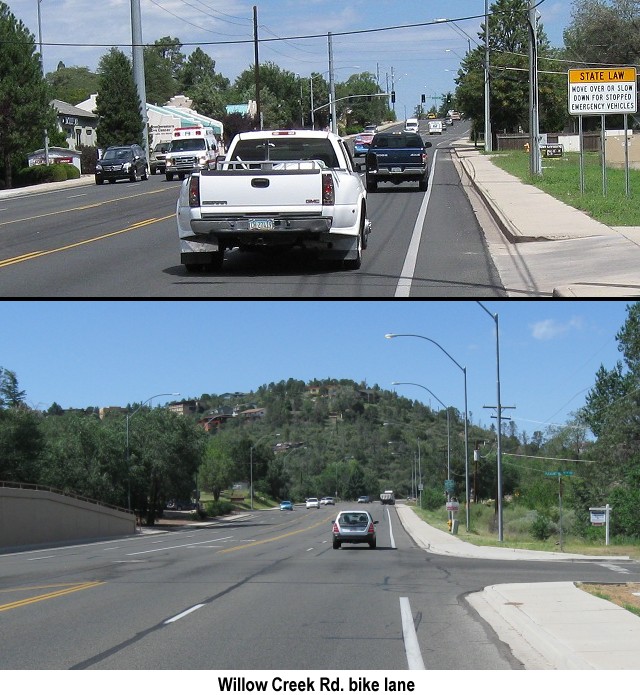 One irony is that this road has a “Move over or slow down” sign to encourage respect for the safety of emergency workers (top photo). But the bike lane tells motorists to do the opposite for cyclists: ignore the cyclists in the bike lane and buzz by at full speed.

Many motorists don’t even see a cyclist riding in the gutter. The motorist sees only traffic in his own lane. You can see this from the photo I took while riding in the bike lane. Notice how the trucks are passing uncomfortably close. Some motorists pass even closer.

Worse, the bike lane is striped right into intersections. This encourages motorists preparing to make a right turn to stay to the left and then to cut across the cyclist’s path. We call this a “coffin corner” intersection. The hazard is more severe on a downhill run where the cyclist is going fast (2nd photo). Note, however, I was not riding in that bike lane at that speed.

There may be a much more dangerous bike lane in Prescott. This one goes down a 7% grade on Prescott Lakes Pkwy. to a coffin corner intersection with SR 89 at the bottom of the hill. The hazards are shown in the set of three photos at right. Note at the intersection (bottom photo), the bike lane is to the right of a right-turn only lane. This violates the mandates of the Manual on Uniform Traffic Control Devices and the AASHTO Guide

This may not be a real bike lane, although most people will assume it is. The city’s “Trails and Outdoor Recreation Map” shows Prescott Lakes Pkwy (and Willow Creek Road) as having bikelanes. However, there are no signs or pavement markings designating a bike lane, thus it may actually be just a shoulder. But still, it is an “attractive nuisance” that could cause serious or fatal injuries.

Rather than bike lane signs and pavement markings, “May Use Full Lane” signs will encourage these assertive safety practices (bottom image). A much better use for paint on the roadway is to mark traffic light vehicle detectors (after first testing and adjusting them).

2 Responses to MOVE OVER OR SLOW DOWN, a good safety message