I’m often asked, “How do you know that cycle tracks and bike lanes are dangerous?  Are there studies that show this?

The answer is “Absolutely yes, but the proponents of these facilities ignore the studies.”

The study that made the most impact on me, I read in 1978 when I was working in the League’s national legislative office.  I don’t believe it was ever published on the web.  Written by Lott, Tardiff and Lott, the study went through every experimental bike lane design in Davis, CA, inch by inch and pointed out the places where accidents occurred.  As a result of that study, some unsuccessful designs were torn up and removed from Davis.

Among the unsuccessful designs were bike lanes separated from other traffic by barriers.  In other words, Davis proved that what we now call cycle tracks caused people to be seriously injured, and they proved it more than 30 years ago.

Now:  we do have more recent studies from Europe.  Here are a few from Copenhagen, Amsterdam and Berlin. http://john-s-allen.com/research/berlin_1987/Berlin5.pdf http://trafitec.dk/pub/bicycle%20tracks%20and%20lanes.pdf http://trafitec.dk/pub/Road%20safety%20and%20percieved%20risk%20of%20cycle%20tracks%20and%20lanes%20in%20Copenhagen.pdf http://nieuwsuitamsterdam.nl/English/2008/04/blind_spot.htm

What these studies do, which is increasingly (and unfortunately) rare is to look at the actual collision types and discuss the mechanics of the collisions.  What we now see instead is, increasingly, indiscriminate lumping of all “accidents” together and looking for a downward slope they can attribute to facility design.

Many new studies fail to offer a logical link between the data and the conclusions and recommendations.

Now a discussion of today’s situation:

One of the problems we face in seeing safety problems is that bicycling is so inherently safe, and the number of cyclists (particularly in northern states in December) is low enough that statistically robust condemnations of bad facilities are hard to generate. Besides, there is no funding for studies that might unearth such inconvenient truths. Whenever I look at the titles of recent studies, my impulse is to roll my eyes and think that the studies are a pretty clear example of apologetics — arguing to support a preordained conclusion, rather than using the data to figure out what the conclusion should be.

Thus, if you have an adversary in this argument, the adversary can whip out studies that survey uninformed novice cyclists about what will make them “feel safe,” Since these people have been told for decades that more lanes and trails will make them safe, that’s the box they check.  You’ll also find surveys of non-cyclists who will say, “Yes, I’ll throw away the keys to my Lexus and ride a bike in February if you build a bike lane up to my house.” These are particularly amusing, but the world of survey taking is full of politically correct responses fostered by the power of suggestion.

And, of course, you’ll also get garbage statistics from certain “Bicycle Friendly” cities.

I’m particularly suspicious of safety claims made of New York’s cycle tracks. They started claiming superb safety improvement before the paint was dry, but I’m sure they lack the volume of data that would support a statistically defensible conclusion.

Also, as someone else once pointed out, if a population-based accident rate declines year by year, it can easily be unconnected to, or in spite of, any facilities building program. It can be (and probably is) because the population of cyclists is growing older and more cautious. In this case, the numbers look better and better, but no individual cyclist is any safer than he would be in the complete absence of those facilities. In many cases, cyclists would be safer without the facilities, especially if the effort involved would be expended instead on good bicycle driving education.

The mechanisms that cause collisions are clear-cut and easy (for someone with an open mind) to understand. Other articles on this site and on some of the sites we link to explain this well.

We need to bust the myth that intersection accidents will be any fewer with cycle tracks or space-separated (“buffered”) bike lanes or with “conventional” bike lanes on ordinary roads. In all these cases, the mechanism that causes the collision (screwed up juxtaposition of through and turning traffic) remains the same.  Arguing that a cycle track is fundamentally different is refusing to understand the mechanism that causes the collision.

I would ask any bikelane advocate to think about his assumptions. Too often, the process starts with, “I want to build a bike lane unless I get talked out of it.” Rather, the process should be, “I want bicycle traffic on this street to be as safe as possible, and no traffic control device should get in way of that, or interfere in any way with instructing cyclists in the safest possible road position.”

And after that, we should look at how the design will be understood by law enforcement.

Where politics requires putting paint on the road, the best option is shared-lane markings, often (but incorrectly) called “Sharrows”.  If these are installed properly — in the middle of the travel lane, in between the two tire tracks, or (as a compromise) halfway towards the right tire track then they can do some good. The photo below (from Franklin Ave. in Cleveland) shows correct placement. 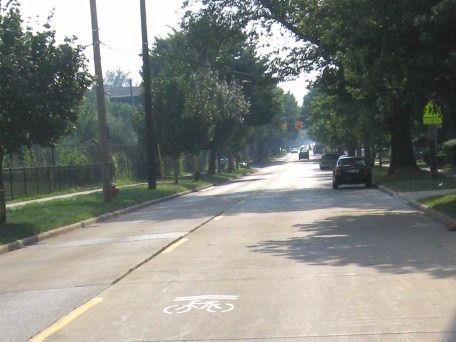 The hard part is getting shared lane marking installations correct. You’d think that a page of instructions (which is what is in the Manual on Uniform Traffic Control Devices) would keep people from making major mistakes.  But you’d be mistaken.  Most of the shared lane marking installations I’ve seen in 2010 are real disasters, because they instruct cyclists to ride in a hazardous fashion.

Since most members of the motoring and cycling public don’t know what safe cycling looks like, and don’t recognize it when they see it, I fully expect that they won’t understand a properly placed shared lane marking.  But they will drive safely around the few cyclists who do understand it. That’s the beauty of traffic law — it’s a shared understanding that works without our thinking about it.