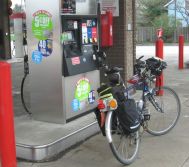 Many cyclists, including this author, are motivated by a desire to reduce their personal environmental impact.  Unfortunately, some anti-car activists promote the bicycle in ways that increase the danger and reduce the convenience and enjoyment of cycling.

By using fear to sell separate facilities, “bicycle advocates” discourage potential cyclists.  By bicycle advocates (as distinguished from cycling advocates), we mean people trying to promote the bicycle without considering or understanding the real needs of cyclists.  Their misguided advocacy unwittingly supports those motorists who wish to get bicycles off the roads so they can drive faster.  How can we promote cycling as an alternative to motoring without the negative consequences caused by uninformed zealots?

Problems of promoting the bicycle as the savior of the world.

Searching for an answer

We need to reach out to “bicycle advocates” as potential allies.  If they learn to understand the real needs of cyclists, perhaps they will stop promoting dangerous separate facilities.  We must find a way to work with people concerned about a healthy environment, livable communities, public health, etc. to advance their worthwhile goals without a negative impact on cycling?  We must influence these advocates so they help cyclists rather than doing harm.

We must get these advocates to learn from us so they can help teach new cyclists the best practices.  Using these methods will help people really enjoy cycling, and thus want to do it more.  Only after learning the best practices was this author able to became a regular and (almost) all-weather bicycle commuter, with over 200 rides to work each year.

They must realize that reasonable speed is essential for bicycle transportation.  A commuter (like the author) who lives 8-10 miles from work is much more willing to spend 30-40 than 90 minutes each way on the commute.  Faster cycling provides a much better health benefit as well.

There are only two safe ways to operate bicycles separate from motor traffic:  The first is to restrict bicycles to pedestrian speeds.  Enforcing such an extreme speed restriction would make cycling not useful except for short distances or for leisurely recreation.  The second method is to make the separation complete — keep bicycles totally away from other traffic.  This means no intersections and no driveway crossings.

There are few places where total separation is practical, especially in a city.  It works only in special places, such as along a coastline where there is no cross traffic.  Grade separated facilities like freeways are extremely expensive except perhaps on an abandoned RR, or in a river gorge.  Even in such places, we must keep pedestrians off bicycle facilities (provide separate paths). 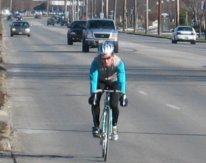 Fortunately, we already have an extensive network of bicycle facilities — the public roads.  Most roads, such as the one at right, are already very suitable for bicycle use just as they are.  We need to promote them as bicycle facilities.  Every lane is a bike lane!  Where there are road hazards (some are listed below) they must be fixed.

Environmentalists typically do not like hunting; many are openly opposed.  Yet they often join forces with hunters’ conservation organizations, such as Ducks Unlimited, to work for preservation of wetlands or for other goals of mutual interest.  They realize that forming coalitions benefits everyone involved.

In contrast, “bicycle advocates” show no interest in protecting the rights of cyclists to use the roads.  They oppose the idea that cyclists and motorists can coexist.  They claim that streets with narrow lanes are too narrow and too dangerous for cyclists.  They support those motorists who would like to kick cyclists off the roads so they can drive faster.

If wildlife advocates applied the tactics of the bicycle advocates, they would call for draining marshes to prevent hunters from shooting ducks.

Educating society about proper cycling methods and overcoming negative stereotypes will lead to the greatest amount of bicycle transportation.  This is the only way to provide the greatest possible benefit of reducing auto use through cycling.  Every public road (except some freeways) must be regarded as a bicycle facility and every lane as a bike lane.

Please join us and help restore the League to members.