Here are some photos of bicycle facilities in downtown Chicago from July 2014.

This cycletrack has narrow lanes, a special hazard to contra-flow (SB) cyclists, who are next to the sidewalk. It would be safer to have a buffer between the sidewalk and the track instead of next to the parking/turn lane.

Dearborn is a 1-way street with 2-way cycle lanes. Note how narrow the lanes are. Does this meet design standards? There is also a falling hazard from the curb and a hazard from pedestrians stepping off the curb without looking because no moving cars are in that lane.

It would be best to eliminate the track entirely. This would give cyclists wider lanes. Blocks in downtown Chicago are short enough that itâ€™s not a big time eater to have to detour one block west (to Clark St.) in order to go south.

A pedestrian was standing in the SB bike lane. There is a small puddle at the curb. (At another location, a larger puddle completely covered the SB bike lane. Note separate signal phases for cycle track and left turns, which reduces green time for both, adds to congestion and air pollution. Installation of the cycle track required prohibiting left turns on red from Dearborn onto one-way WB streets and from one-way EB streets onto Dearborn. 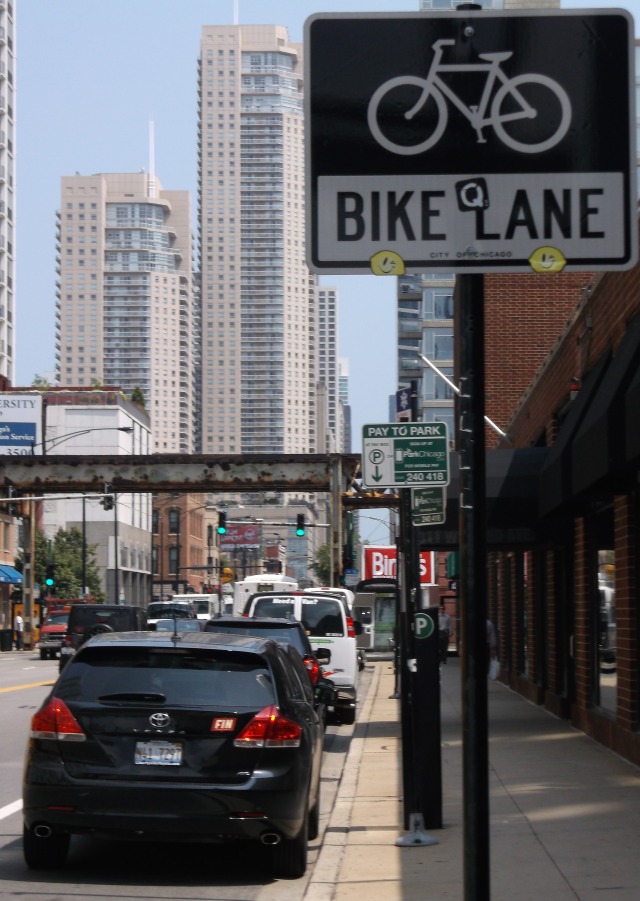 There is no pavement marking in the travel lane relating to bikes. (The cars are legally parked.) Are cyclists expected to ride on the sidewalk? Or to “share” the curb lane with parked cars?
This entry was posted in Uncategorized. Bookmark the permalink.