Let’s start with what should be the obvious problems — riding on the wrong side of the road [note 1], no lights at night [note 2], flagrant traffic violations like running red lights and riding on sidewalks. These are best addressed with education, teaching people that bicycles are really vehicles that must be operated according to the standard Rules of the Road.

Unfortunately, most “bike safety education” is done so poorly that many people think it is safer to ride on sidewalks or wrong way and that flouting traffic laws makes little difference. Sometimes we even hear of police encouraging bad practices.

We need cooperation by government, including sensible and fair laws, proper training of police on bicycle operation and a strong and persistent public education campaign to overcome popular fallacies [note 3]. Education must encourage assertive safety practices. This often means riding near the middle of the traffic lane and not in the gutter (See Fig. 1) and certainly not on a sidewalk. 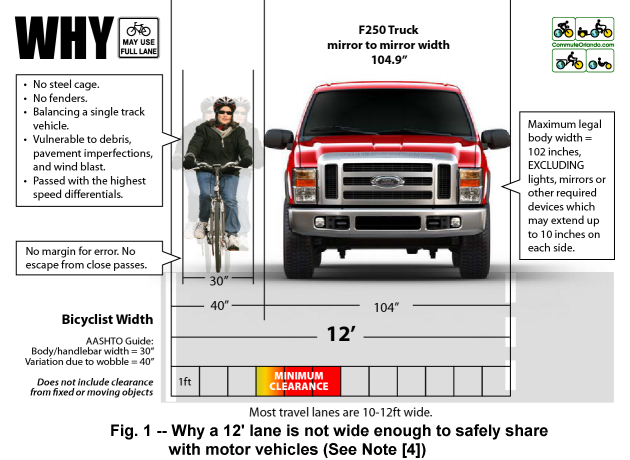 The safest methods are counter-intuitive and most “Bike Safety” teaching is wrong! We must combat the fallacy that teaches the greatest duty of cyclists is “staying out of the way”. Segregated bike lanes reinforce the “duty” of staying out of the way. Out of the way means out of sight and out of mind. This often leads to collisions.

The best and safest practices involve following standard traffic laws (the Rules of the Road) and riding assertively and confidently. This often means riding near the middle of the traffic lane, not slinking along at the edge of the road or in the gutter. The middle of the lane is where other drivers look for traffic.

You can see some really good educational material at Commute Orlando and Cycling Savvy, including Animations about lane control and FAQ: Why do you ride like that?.

Notes: [1] Many people confuse cyclists with pedestrians, who are told to walk facing traffic. But cyclists travel 3 to 5 times faster than walkers (and even faster downhill). Bicycles cannot stop “on a dime”, they rely on brakes. And bicycles cannot turn in a stride or sidestep or jump backwards. Bicycles are vehicles that must be driven. If you ride “wrong way” you are outside motorists “zone of vigilance” and are much less likely to be seen.

[2] The set of seven reflectors that the CSPC requires on new bikes look like safety equipment, but only the rear-facing ones are very effective in alerting motorists to the presence of a bicycle. And even the rear reflector has about 2/3 of its surface directed away to the sides. This makes it much less-bright than it should be. Wheel reflectors look impressive when you see a cyclist approaching the road from a driveway. However, in this case, the cyclist is required to yield so a motorist does not really need to notice the bicycle. But if the cyclist is on a main road and a motorist is approaching from the side, the headlights shine away from the bike’s reflectors. Here, the motorist is required to yield to someone who may be invisible. In other words, wheel reflectors work when they are not needed but often not when they are needed. Only an active light provides the visibility needed at night. [3] Popular fallacies (the Three Big Lies) about bicycle operation: [4] Illustration from Commute Orlando The link shows why lane control (using the full lane) is much safer than sharing typical traffic lanes.
This entry was posted in Uncategorized. Bookmark the permalink.