Beyond Spandex: Where is the traditional cyclist in this movement?

The League of American Bicyclists posted a recent entry titled “Beyond Spandex, Toward Social Justice: Women Redefining the Movement“. Men, who have made up the statistical vanguard of ridership in the past, are relegated to an acronym, MAMIL, i.e., Middle Aged Men In Lycra. We subsequently learn of the efforts to be more inclusive, making sure that womyn (League’s spelling in one instance, not mine) and minorities are included in cycling.

I think it is great to have more people on bicycles, as long as it is not a politically-driven desire for more butts on bikes. Cycling should not be a class or gender based activity. Nor should cycling be restricted to those wealthy enough to afford something picked from the Bicycling Magazine Annual Review of Outlandishly Expensive Bikes pages. If that had been the case decades ago, I would not have been riding. Likewise, infrastructure, whether in the gentrified or rough side of town, should be examined to ensure it is not unduly impeding people from using a bicycle as either transportation or avocation should they want to do so. Bicycling should be a choice available to anyone who really wants to ride, but should not be something we hit people over the heads with as a moral statement of a greater good. Certainly there are a lot of good things to say about bicycling, but when it is reduced to a recipe for saving the earth, saving the individual from cardiac care, or saving the world (all of which the simple bicycle can play a role in doing), it becomes hopelessly entangled in weird politics.

Certainly, women have their own needs, whether it be bicycles designed for the female anatomy or cycling activities that fit into very busy and complicated lives. Not that the men I know don’t have similar time constraints. We have a woman who works in my group who has been trying to find time to ride competitively between work demands and the demands of a single mom with two small children. Being a new rider, she wanted company on the road. That’s being worked on, including me occasionally changing my riding schedule so I can coach her. Surely, to be inclusive, we all need to look inside ourselves as cyclists, ask what we can do to encourage others who don’t look like the guy in the mirror and who have different situations, and reach out to them. That’s advocacy up close and personal.

What worries me about that post, as well as other stuff on the League web site, is whether there is more between the lines, i.e., a sea change in the League’s agenda. Has the League entirely stopped being an organization of avid bicyclists and instead thrown its heft behind current trends in urban planning, anti-car advocacy, and the purported advocacy needs of non-cyclists, i.e., those things we are told to do so someone who has not been riding changes their mind? As a card-carrying MAMIL, I can’t say I can speak for anyone else, so they need to speak for themselves, both within and outside of LAB. But who speaks for me? Do we need a League of American MAMILs? Jusk kidding….

If you build it, they will confine you to it.

Have you ever heard of General Smedley Butler? He was a major public figure in the 1930’s. He was disgusted by the corrupt profiteering he witnessed during WWI, and stumped around the US beginning in 1930, giving a speech entitled “War is a Racket”. END_OF_DOCUMENT_TOKEN_TO_BE_REPLACED

Is Cycling about to die?

There is some pretty dire prose over at the League web site about saving cycling.  While I share the concern with the Federal transportation bill being ludicrously auto-centric and energy-intensive, and I personally worry that the House Republicans are attacking anything they can connect to various progressive movements, I remain confident that cycling is in no danger of ending as we know it, even if our (rather small) seat at the Federal trough is cut back or eliminated.  The power to “save” cycling, assuming it is in need of being saved, is within each of our saddles and indeed, organizations like LAB can fall back on deep roots that far pre-date Transportation Enhancements. Not without some pain, though.

Some good will possibly die if this bill passes as written. We could be hamstrung in defending against poor rumble strip placement and bridges lacking cycling access, as mentioned in a comment on the LAB Blog by Bill Hoffman. I’d add to that list that there should be Federal drivers that we have qualified people on state DOTs who know something about bicycling and can push for good roads-although I’ll probably take some flak here for saying that due to some of the more dubious things foisted on cyclists by planning funded under Federal programs or pass-throughs-the emphasis should be on quality, not quantity. I would like to see Federal standards on shoulder quality in rural areas. Even under current law, New Mexico kills cyclists with impunity on badly designed state bike routes.  For that matter I would like to see Federal standards protecting our right to the road so a cyclist on a transcontinental (i.e., interstate) journey doesn’t have to worry about Black Hawk, Colorado (a worry recently brought close to home in Albuquerque when the cycling community, including LAB, fought off an attempt to ban cycling on a perfectly good road). Finally, in a nation as dispersed as ours and where much of 20th Century urban architecture has focused on automobile based mobility, I really do think we need to address how we will integrate more sustainable modes into our national consciousness, as a national security  as well as public health issue.  That is one role I would like to see us not leave to landscape architects or auto-centric policy makers.

But cycling will not die. We don’t need to save it but we do need to nurture it. We do need to keep the baby and toss the bathwater, when it comes to Federal programs.  Let’s make sure the cycling community doesn’t form a circular firing squad on this topic.

Bicycle Facilities and the “Cargo Cult”

Posted on January 6, 2012 by JPRosenfeld 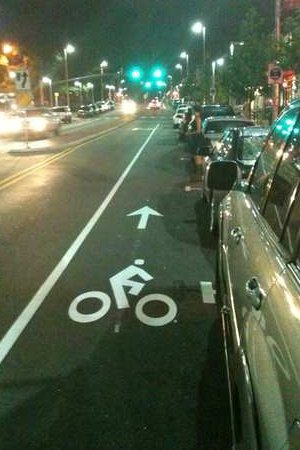 American bicycle facility advocates typically believe they can achieve the same bicycling safety and modal share as the Netherlands by blindly imitating Dutch facility designs. They assume the facility is what makes the difference when in reality it’s a complex set of physical and cultural differences that lead to both the greater safety and the higher bicycling modal share. END_OF_DOCUMENT_TOKEN_TO_BE_REPLACED

What is the purpose of a bicycle lane?

Andy Cline has some thoughtful questions in his article Please Be Careful. Here’s some excepts:

Please be careful what you ask for; please re-think asking for more bicycle lanes.

Driving your bicycle as as normal part of traffic is already safe.

What is the purpose of a bicycle lane? As far as I am aware there are two:

1) To keep you from using the road that is rightfully yours. Car drivers use the road by privilege after receiving permission from the state (driver’s license and license plate for the car). Bicyclists use the road by right. No permission is necessary. And no bicycle registration fees are necessary because our bicycles do no harm to the road. Our bicycles also do not kill 35+ thousand people per year. Lanes are an effective way to keep you shunted to the side so that car drivers can ignore you.

2) To encourage more people to ride bicycles. Notice the interesting contradiction between these two reasons. Some bicycle advocates want more lanes because they want more people to ride bicycles. Some novices like bicycle lanes because they have yet to learn how to effectively and safely drive their bicycles in traffic. A big problem arises, however, when lanes are painted that are actually more dangerous than the road — door-zone lanes for example.

The full article has a link to an interesting video Why You Should Avoid the Door Zone.

On Hazards, Warnings and Luring into Danger

Standard safety practice requires warning about hazards that cannot be eliminated. One of the greatest hazards of cycling in the city is a suddenly-opened car door. 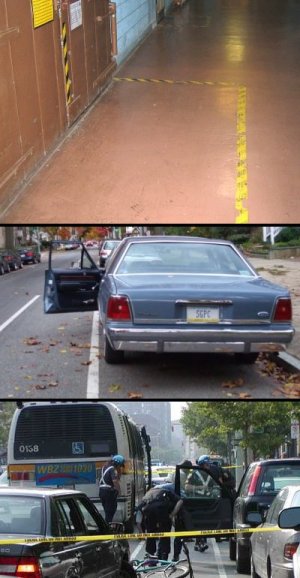 Doors can poise a hazard for pedestrians too. In the top photo at right, the black/yellow stripe on the floor warns of the danger area from a suddenly-opening door. The stripe tells people walking there to stay out of the door zone.

The door zone is a bigger hazard for cyclists because of their greater speed and the risk of falling under the wheels of passing traffic. So why do bike lanes lead cyclists into danger instead of warning them away? See the middle photo (from “Bicycle Friendly” Washington, DC).

These hazards can have deadly consequences, as shown at bottom. Dana Laird, a Tufts University graduate student was riding in a door-zone bike lane heading to a Boston Red Sox game when someone opened a car door. She was knocked under the rear wheels of a passing bus and killed.

While motorists should be more careful opening car doors, cyclists can reduce their dooring risk to ZERO simply by riding at least 5-6 feet from parked cars. This kind of “accident” is 100% preventable. Luring cyclists into danger is simply inexcusable.

For some safer ways to promote bicycling, see Best Practices of Cycling Advocacy.

Why does a bicycle-friendly community need door zone bike lanes?

We recently took our tandem to Durango, CO to escape the thick smoke of the Wallow, AZ wildfire. I like the Durango area and have tossed a bike in the car on our trips there.

Durango is a Silver-level bicycle friendly community. Lots of people are biking there. It did seem quite accomodating. Our hotel, the lovely Rochester, even had a fleet of cruisers that could be signed out.

But why, I kept asking, are some of its quiet, wide city streets striped with door zone bike lanes? There is often plenty of room to “share the road”. Why consign cyclists to the door zone in a bicycle-friendly community? Some of those bike lanes were absolutely unnecessary and if anything, took away from Durango’s bicyclist-friendliness.

More here, on my own site. http://labikes.blogspot.com/2011/06/durango-co-door-zone-bike-lanes.html

On Being Refused Service 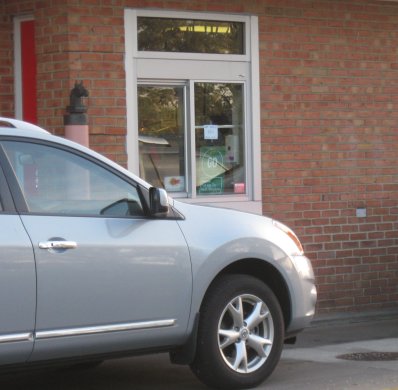 For lunch today I stopped at the local “Scottish Cuisine” fast food restaurant for a sandwich to take home. I wheeled my touring bike up to the order station, wondering whether the vehicle detector would pick up my wheels. It did. END_OF_DOCUMENT_TOKEN_TO_BE_REPLACED

Voting With My Feet — and My Wallet

I did not renew because I am reluctant to send the League any more money, knowing it would be used to harm the interests of responsible cyclists. I also prefer to belong to organizations that I can be proud of. END_OF_DOCUMENT_TOKEN_TO_BE_REPLACED

I was once conversing with a person who was annoyed with my cataloging the known dangers of various bicycle facilities. He fumed, “You only want people to ride a bike if they ride like you do.” And then he stormed off before I could respond. END_OF_DOCUMENT_TOKEN_TO_BE_REPLACED